Comms in a cold climate

Philip Mason talks to Intelsat about the challenges of providing communications to the McMurdo research station, located in one of the remotest and most inhospitable regions on Earth

Being a largely UK-focused title, Land Mobile generally concentrates on what might be regarded as ‘low impact’ deployments of communications technology, at least when it comes to environmental conditions.

This is not to say, of course, that UK-based roll-outs are any easier for the lack of extreme weather. It’s just that, even with all the technical challenges, one thing that the – let’s say – Emergency Services Network doesn’t have to deal with is volcanoes, hurricanes or earthquakes.

With that in mind, in this article we are covering a deployment where the main interest is precisely the environmental conditions, namely the US government-run McMurdo research station, located in Antarctica. Without wanting to state too much of the obvious, this is a part of the world which gets extremely cold, with temperatures dropping to as low as -60°C.

At the same time, the station is also incredibly remote, located as it is just north of the largest ice shelf on the continent (that is, the 200,000 square mile Ross Ice Shelf). Needless to say, if any maintenance needs carrying out or an external engineer is required, it’s probably best to plan in advance.

The station itself is the site of a variety of different, mostly research-based, activities, carried out under the auspices of the US National Science Foundation (NSF). Like the geographical feature next door, it too is the largest of its kind in the region, housing up to 1,300 people and boasting a harbour, three airfields and a heliport.

As might be imagined, those inhabiting the site have a variety of communications requirements, both in terms of their work as well as the need to stay in contact with friends and family back home. They also need to be entertained, which means Netflix, Amazon Prime and so on.

One company providing connectivity to the station is Intelsat General Communications, installing a satellite communications system to serve the station at the end of last year. Discussing this in a press release published at the time, the company said: “Intelsat General is partnering with the NSF’s US Antarctic Programme prime contractor, Leidos, to install new equipment, including a new satellite terminal, to determine the feasibility of future high-speed data transmissions.” 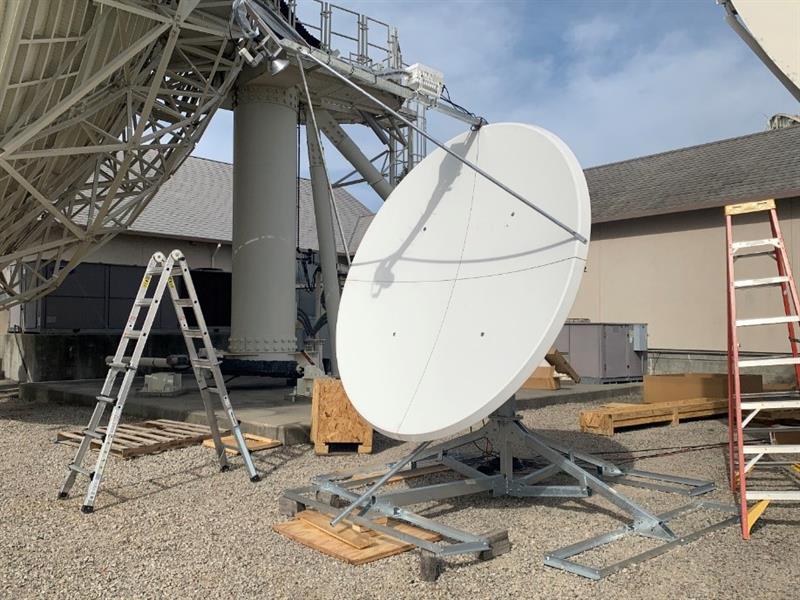 The statement continued: “The equipment scheduled to arrive to McMurdo Station consists of a General Dynamics 2.4-metre high-wind terminal, with a Newtec modem. [The antenna/modem combination] is capable of transmitting at 90 megabits per second in both directions, on an Intelsat Horizons 3e satellite
spot beam.

Scott Tatum is the senior sales director at Intelsat General, and as such has intimate knowledge of the roll-out. Going further into the communications requirements, as well as what actually goes on at McMurdo, he says: “US Antarctic Programme is a multinational group of scientists and researchers – folks out of NASA, the US Oceanic and Atmospheric Administration, and so on. The work carried out there is really quite extensive.

“At the same time, there are also a variety of support agencies which interact with the site, such as the US Coastguard. They send ice-breakers so the re-suppliers can make it onto the station.”

He continues: “In terms of the work which goes on there, one example would be NASA monitoring the environment and weather conditions. It’s also a hub for interstellar research, with the station acting as a listening post for information which is not visible from Earth-based telescopes.

“A lot of this research is now incredibly data-driven, which then needs to be analysed and modelled. They obviously don’t have the requisite personnel on-site to physically carry this out, so all the information has to find its way offsite. The scientific requirement five years ago was about 20 megabits per second, whereas now it’s grown to somewhere in the gigabits range.”

As well as the need to communicate research data back to the world, those occupying the station also need ways to fill their downtime. Naturally, this includes the provision of audio/visual entertainment as well as the all-important contact with loved ones.

According to Tatum, the bulk of the scientific community arrive during what is known as the austral summer – which runs from October to February – and leave again soon after. This is a time, he says, “when the weather’s almost clear”.

At the same time, there is apparently also a hardcore who stay on the site all year round, a group which numbers around 200 to 300. For those people in particular, it is easy to imagine that the loneliness and boredom could have the potential to become unbearable.

“No matter how much of an amazing global mobile phone plan you have,” Tatum says, “there’s just no chance of commercial coverage reaching the station. That part of the world contains a huge amount of RF quiet zones, which is why such a lot of interstellar research can take place there.

“Therefore, there’s also none of the things that we’ve now started to take for granted across the rest of the world. For instance, there’s no broadcast television in Antarctica. This is an area where our initial inroads into the advanced capability, facilitated by the satellite technology, has really started to shine.”

Having established the parameters of the use-case, Tatum now moves onto discussing the technology itself, which – he says – has enabled the equivalent of 3G/4G-quality connectivity across the site.

Explaining the set-up, and in particular the role played by the Horizons 3e satellite, he says: “The services being provided are in the C band [4 to 8GHz], as well as KU [12 to 18GHz], which enables data. These high-throughput satellites – HTS – provide the backbone infrastructure.

“While essentially unchanged over the years – it’s the same modulation over RF frequencies – satellite communications have become a lot more sensitive. The satellites themselves are also becoming increasingly advanced.”

He continues: “One example of this is the digitisation of the payload, with digital bussing now enabling transmission in one frequency and reception in another. This is necessary because existing ground station equipment could be limited to a specific frequency range. The flexibility also allows the ability to overcome frequency restrictions or wave propagation issues at the remote site.

“The technology itself has also got much smaller, lighter and more powerful. That means the spacecraft, but also the infrastructure on the ground. The equipment has become much more manoeuvrable and user-friendly since the 1980s, when you’d see these enormous dishes for picking up satellite TV on people’s lawns.

“The satellites themselves are deployed in orbital slots, like a string of jewels around the equator, something which is known as ‘geosynchronous orbit’. Once a satellite has degraded to the point where it’s not useful any more, it’s either brought back in through the atmosphere or removed into a higher orbit.”

According to Tatum, the McMurdo set-up uses a high-power 2.4-metre antenna, which as well as being relatively easy to shift also has the benefit of being both wind-resistant and ruggedised. These are used to set up a distribution network, with multiple dishes receiving from multiple geographic locations. “This kind of communications distribution is something which the military has been doing for a long time,” Tatum says.

As discussed, the McMurdo research station is in one of the most inhospitable environments in the world, combining extreme cold with extreme isolation. This in turn brings specific challenges when it comes to the deployment of communications technology. 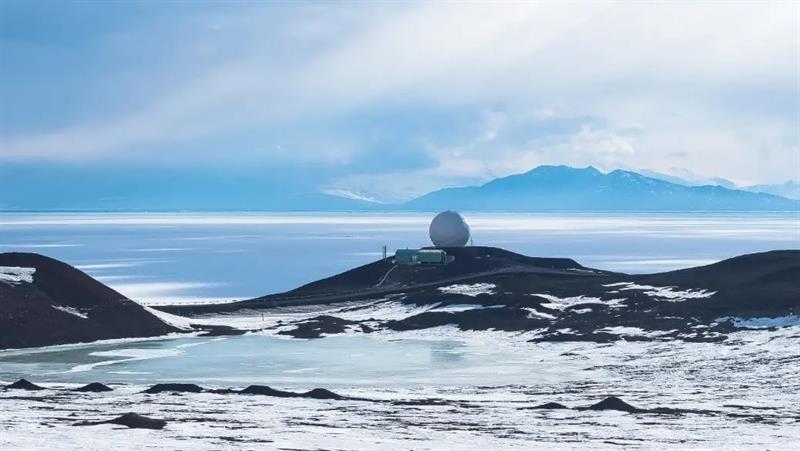 The first of these is the climate itself, with the near impossibility of laying fibre-optic cable in the frozen ground necessitating the deployment of satellite technology in the first place. It is also incredibly windy, with – according to a well-known online encyclopaedia – “cold, heavy air descending rapidly from the polar plateau at elevations of 3,000 metres”.

Perhaps more interesting than the cold, however, is the topography of the landscape, which also affects the communications effort, albeit in a different way. Discussing this, Tatum says: “Alongside the temperature and the winds, that part of the world is also quite mountainous. One challenge in relation to that is finding a location with a clear line of sight to the orbital arc of the satellites.”

This process is further complicated, meanwhile, by restrictions around use of the environment, as well as previous ways in which the US has treated that part of the world. “Part of the mission down there is environmental, so you can’t just start blasting mountains in order to put in an antenna,” says Tatum. “But there’s other restrictions too, with the US having been there since the 1950s.”

This, you assume, is a reference to the PM-3A nuclear power plant activated by the US Navy in 1962 and subsequently decommissioned 10 years later due to safety issues. “Since then, a lot of things have been removed and cleaned up,” Tatum says. “They don’t want people in those areas, even though they’re deemed safe.”

The McMurdo station is a wonder, not only of technical and scientific expertise, but also of international co-operation. The effort required to deliver modern communications linking to the rest of the world is no less impressive.