The U.S. city of Atlanta has become home to a new fleet of 5G-powered and 3D-printed autonomous shuttles launched as part of T-Mobile’s ongoing work in the smart city testbed.

The Peachtree Corners suburb of Atlanta is home to the Curiosity Lab smart city project, funded by the city and federal grants, and includes a 1.5-mile test and demo track for autonomous vehicles among a series of pilots at the 500-acre technology park.

In the latest development, German telecoms giant T-Mobile has collaborated with mobility solutions provider Beep to develop a fleet of electric shuttles built by manufacturers Navya and Local Motors which the group have named PAUL (Piloting Autonomous Use Locally).

The fleet works at ‘Level 4 and 5 autonomy’ including having full self-driving capabilities. This relies on cellular vehicle-to-everything (C-V2X) connectivity using T-Mobile’s public 5G network and local edge compute functions in an intelligent transport system (ITS) to run low-latency communications between vehicles and road infrastructure.

The 3D-printed version of the shuttles developed by Local Motors is called Olli and is also equipped with a 5G gateway to capture, issue, and process various telematics data including emergency communications with blue light services. Beep is providing ‘command center’ (BCC) capabilities to manage traffic.

The initial route of the new autonomous shuttle service will pass seven stops along the three-mile Technology Parkway route stopping at Hampton Inn, City Hall and the Innovation Center at Curiosity Lab. T-Mobile said it would look to add additional routes if the trial period is successful.

Dave Bezzant, vice president at T-Mobile USA, said: “The vision of 5G powering the city street of the future is happening now at Peachtree Corners where people, vehicles and infrastructure all communicate with each other to elevate safety and improve everyday life.

The test track used in Peachtree Corners is also a public road, with a three-mile loop having built-in V2X infrastructure. T-Mobile’s deployment follows a test earlier this year by Ford, which ran a series of Level 3 vehicles on Peachtree Corners’ open-source platform for smart-city developers to try out new mobility technologies.

Brian Johnson, city manager at Peachtree Corners, said: “We’ve made it our mission to create the city street of the future in the most differentiated smart city environment in North America – and with Beep launching the new PAUL autonomous shuttle service, we’re continuing to break new ground.

“This deployment not only allows for the continued development and deployment of safe, enjoyable and eco-friendly transportation options – but it also allows a true mobility-as-a-service pioneer to leverage our city-owned V2X infrastructure and vibrant ecosystem to help accelerate new technology development that further enhances safety and earns critical trust from the public.” 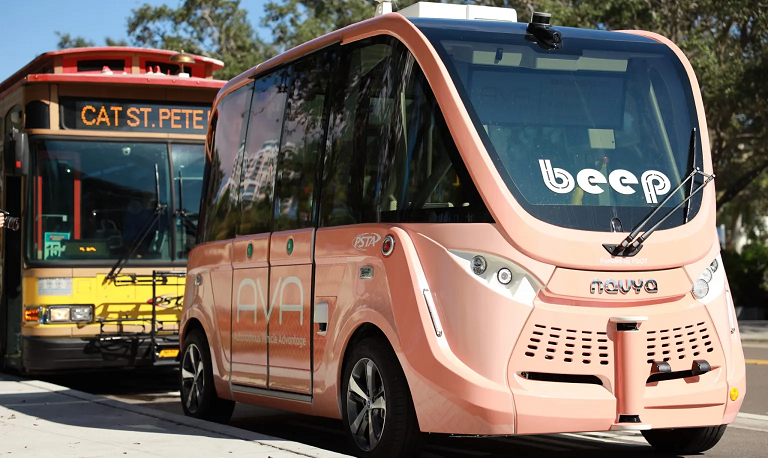